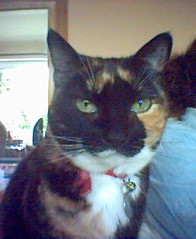 Sophie
Originally uploaded by GreekVicar.
Sophie came into my life as a one year old. She arrived, with her sister, Ephie, from Cats Protection in the May 1992. Just a couple of months before Jane and I married.
A few year ago Sophie had part of her thyroid removed. She did well on it up until last year when she started to lose weight.
She went in to have the remainder of her thyroid removed a week ago on Monday. The operation didn't go well. It was found that the tumour had grown all over her throat. She kept on fighting though and, with the help of the nurses, came home on Friday.
By Sunday she appeared to be picking up. Unfortunately she went into decline on Monday and finally passed away yesterday morning (Wednesday 20th August).

Me, I'm heartbroken. Far, far more so then I ever expected to be.
Collapse